Cort Brinkerhoff is a playwright and screenwriter based in Los Angeles. A native Utahn and long-time Angeleno, his writing centers on the American West. He began his writing career in the NEA/TCG-funded Playwrights Group at Salt Lake Acting Company led by Julie Jensen and JT Rogers. He is an alumnus of the Utah Screenwriter’s Project sponsored by the Salt Lake Film Society.

Film credits can be found on the author’s IMDb profile page. 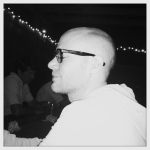